Sunrise-Sunset 2 - A Day at Rochelle, Illinois DVD
By Pentrex 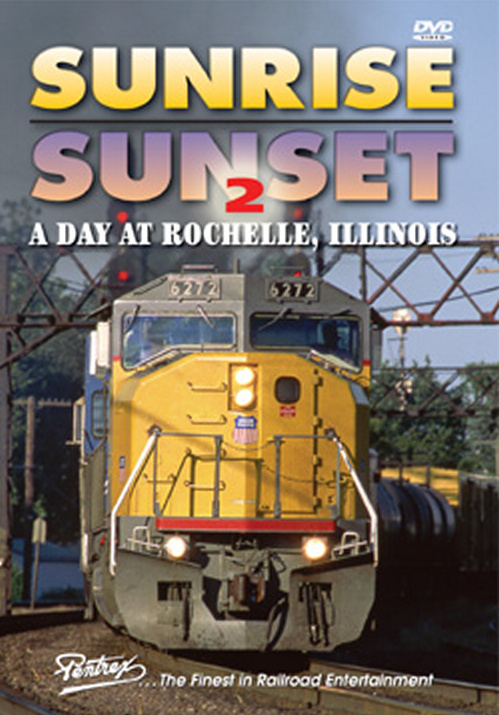 Trains rattle across the diamonds at Rochelle, Illinois, where the double tracks of the Union Pacific Railroad and the double tracks of the Burlington Northern Santa Fe tracks intersect. Pentrex cameras set up before dawn at Rochelle on this busy day in 1999 to record every passing train from sunup to sundown, over eleven hours. An unending parade of intermodal, coal, and manifest trains flow past our cameras, headed by a vast array of motive power representing most modern locomotive types. Train symbols and destinations are shown for all movements across these former Chicago & North Western and Chicago, Burlington & Quincy diamonds.

This busy spot draws railfans from around the world like a magnet. To cope with the growing numbers of eager fans, the community of Rochelle constructed a unique railroad park complete with covered pavilion. It was an instant success, but not without obstacles, as you ll hear from the crusader who fought great odds to make it a reality. Join us for a day at Rochelle where trains just keep on rolling past the pavilion. It'sa fascinating location and an amazing story that'sturned Rochelle into a railfan hot spot on the Midwestern prairie!